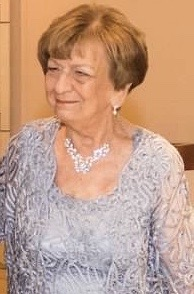 Very few people who have lived in the south suburb of Flossmoor over the past 50 years have not heard of Joan (A/K/A Gammy) Dobrez.

Born and raised on Chicago’s south side along with her brother Bud, Joan moved to her beloved Flossmoor in 1967 and began to change it forever. Her legacy remains throughout the town. It remains in the Catholic parish of Infant Jesus of Prague. A parish she helped sustain with numerous fundraisers and stewardship. As a dedicated parishioner of the parish for 50 years Joan and her husband John originated such popular community events as Flossmoor in Autumn and Curtain Call the all-volunteer variety show that was staple of the community for over a dozen years. She was chairperson for numerous events from ASID (American Society of Interior Designers) and the CSC Christmas House Walks.

Her legacy also remains in the hearts of the scores of kind people who continue to serve the thousands of patients that benefit from the services provided by the Jenny S. Fallick Cancer Support Center (CSC) in Homewood. Joan helped start the CSC with Jenny, Patricia McDonald and others. Shortly after the establishment of the CSC, Joan developed fundraising alternatives and played an integral part in the Center’s ongoing annual Gala Presentation. Then soon after, Joan and a few close friends opened the Village Door Consignment Shop which continues to raise monies for the Center through its Ridge Road location in Homewood.

Her devotion to her community has not gone unnoticed as Joan has received numerous accolades for her tireless and selfless assistance to noble causes. From the Cancer Center’s Founders Award to the revered Woman of the Year acknowledgment from the Abby Foundation whose goal is to ”raise money and give it to women and children who need it,". Joan, a two-time cancer survivor herself, did all of this while staying devoted to her husband John for 60 years before he passed in 2010 and her 7 children made up of 6 boys and 1 daughter. And her legacy continues with 20 blessed grandchildren and six great grandchildren. Her family cherishes the kindness and attention from their beloved Gammy.

As one acquaintance said, “who can say no to Joan Dobrez”. Very few did and her life’s accomplishments attest to her endless energy and devotion to her religious faith that she still holds dear. And did we say she loves to throw a party?

As a big fan of ritual, Joan adored the holidays and landmark family celebrations. Her 4th of July celebrations in southwestern Michigan have brought generations of neighbors together and cemented relationships while even being the genesis of a marriage or two. And don’t forget Christmas. From her epic interior decorations to the hours spent as a power shopper in small business shops across the Southland, Joan’s tireless preparations assured family and dear friends who gathered to celebrate that all was calm, and all was bright. As her seven in-laws have subsequently learned, Gammy owns Christmas. Christmas Eve made up Joan’s whole being. From the endless gift shopping to full course dinners served on the family’s Spode, each year reminded all in her family of the importance of time together to share and celebrate the family’s blessings.

Gammy Joan Caroline Sloup Dobrez has been a blessing to her community, parish and family for much of Flossmoor’s formidable growth decades and her legacy continues as a parent, in-law, aunt or grandmother to nearly 30 Homewood Flossmoor High School graduates, Joan’s dedication to serve will continue to provide a guiding light to all those numerous lives in the south suburbs she touched. Her advice to all was “you’ll get your reward in heaven.” There will be some very special place built there especially for Joan. For she raised all of us up.

The John and Joan Dobrez family have announced the following arrangements for the community to share in Joan’s remembrance. A wake service will be held on Thursday February 6th from 3:00 pm to 9:00 pm at Panozzo Bros. Funeral Home in Chicago Heights and a Funeral mass on Friday (2/7) at noon at her beloved Infant Jesus Of Prague Church in Flossmoor.  A burial next to her husband John, a Korean War veteran, at 2:30 at Abraham Lincoln National Cemetery, Elwood.  In lieu of flowers, family requests contributions in Joan’s name to Homewood Science Center or Cancer Support Center of Homewood.